Record export solves the history problem and the stream provides the kind of exhaustive audit log a workflow engine needs to produce.

An instance of a state machine is always in one of several logical states. From each state, a set of transitions defines the next possible states. Transitioning into a new state may produce outputs/side effects.

Let's look at the state machine for jobs: 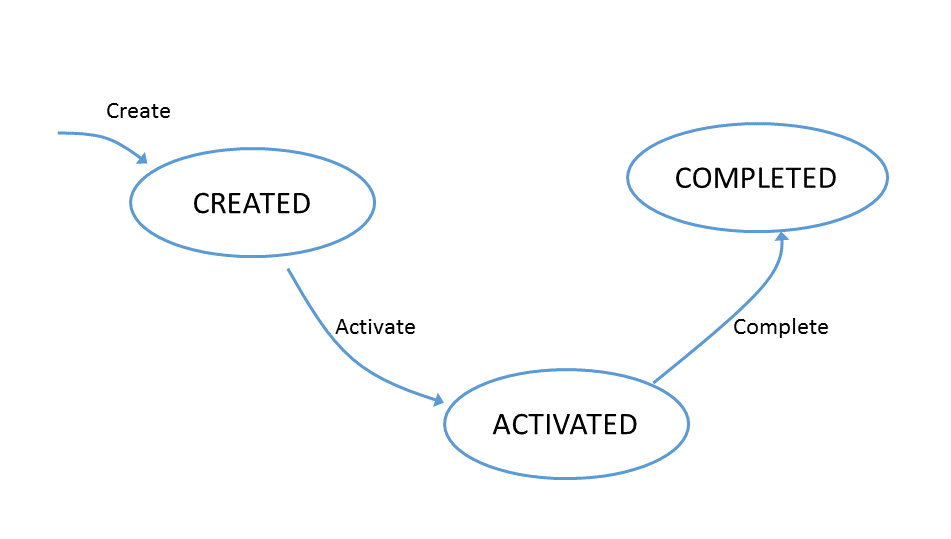 As a workflow engine, Zeebe must continuously drive the execution of its processes. Zeebe achieves this by also writing follow-up commands to the stream as part of the processing of other commands.

For example, when the Complete Job command is processed, it does not just complete the job; it also writes the Complete Activity command for the corresponding service task. This command can in turn be processed, completing the service task and driving the execution of the process instance to the next step.

When a broker receives a client request, it is written to the event stream first, and processed later by the stream processor. If the processing is slow or if there are many client requests in the stream, it might take too long for the processor to start processing the command. If the broker keeps accepting new requests from the client, the backlog increases and the processing latency can grow beyond an acceptable time.

To avoid such problems, Zeebe employs a backpressure mechanism. When the broker receives more requests than it can process with an acceptable latency, it rejects some requests.

Backpressure is indicated to the client by throwing a resource exhausted exception. If a client sees this exception, it can retry the requests with an appropriate retry strategy. If the rejection rate is high, it indicates the broker is constantly under high load and you need to reduce the rate of requests. Alternatively, you can also increase broker resources to adjust to your needs. In high-load scenarios, it is recommended to benchmark your Zeebe broker up front to size it correctly.

The maximum rate of requests that can be processed by a broker depends on the processing capacity of the machine, the network latency, current load of the system, etc. There is no fixed limit configured in Zeebe for the maximum rate of requests it accepts. Instead, Zeebe uses an adaptive algorithm to dynamically determine the limit of the number of in-flight requests (the requests that are accepted by the broker, but not yet processed).