For real-life applications, it's crucial to understand how Camunda deals with evolving process definitions by means of versioning. As a rule of thumb, we recommend to version just the process and decision models, but not other process solution artifacts (like e.g. code classes or scripts). Often you might not even want to run multiple model versions at the same time, then you have to think about migrate running process instances to new versions. When modeling very long-running processes (> 6 months), consider cutting them into reasonable pieces to ease managing your versioning requirements.

As a consequence, when looking directly at Camunda database tables you can see different versions in the process definition table and the running process instances which are linked to these versions:

You can run several versions of a model in parallel.

Run versions in parallel for

Camunda Platform 8 does not yet support process instance migrations as described here. This feature is currently in development and will be available soon.

Migrate running instances to the newest definition when:

You can then apply such a plan to a set of process instances selected by you.

Learn more about process instance migration in Camunda 7 in the user guide. You can also learn about how to use Camunda Platform 7's cockpit there. An interesting option is, that you can export the migration plan you configured in Cockpit as JSON string. This migration plan can be applied later via REST-API, making it possible to fully automate migration even if you do not want to program a migration plan in Java.

It's important to understand that process instance migration maintains the full 'identity' of the migrated process instances including their unique IDs and their full history audit trail. However, as the process definition also might change fundamentally in between versions, this can have effects on the history log of a process instance which might be unexpected from an end user's or operator's perspective.

Things to consider before migration​

When planning your migration, here are some factors to consider:

For Camunda 7 users there is some more information available in these migration examples.

When versioning process or decision definitions, you need to be aware that the process of course communicates with the outside world, e.g. by calling services or by using forms to collect data input from human users. All the additional artifacts needed for that might depend on the details of each other in a subtle way.

Whenever possible, we recommend that you avoid to version other artifacts beyond the process and/or decision definitions, in other words, just version '.bpmn' and '.dmn' files by using the default mechanism of the process engine. Embed all other artifacts (like e.g. classes, templates, scripts) into your normal application (for example a Java or NodeJS application) and don't version them.

Of course, this approach requires that you manage the subtle differences needed by running process instances of old versions. There are various options to do that. And even if some of those options discussed below might not sound 'ideal' from a theoretical point of view, they proved to be good enough for real life purposes and much easier to understand than complex approaches. As understandability by every team member is a very important argument, we recommend going for the approach that is as simple as possible.

The following options us a Java example of a process solution, containing not only the process model, but also some Java code and an HTML form:

Extend the functionality of e.g. a method in MyClass.java in a way which can still deal with "old" process instances.

Assume you introduced a customerId in the new version of the process. Your code can still deal with old cases not aware of a customerId. 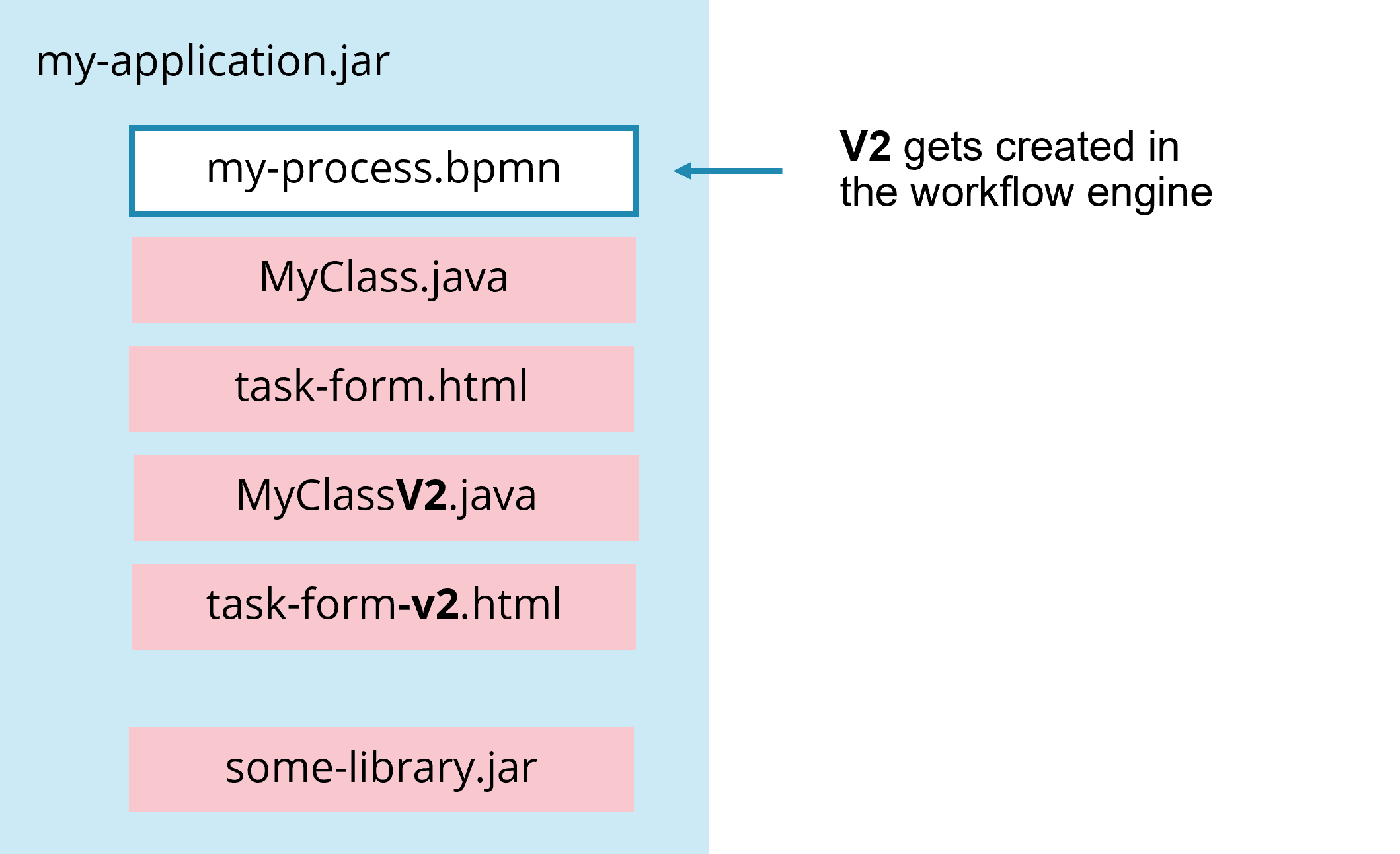 Sometimes it is preferable to manage different versions by means of folders/packages. Just make sure to have a clear and straightforward convention to keep track of the versions.

In general, do not be concerned with deploying long-running processes which might run days, weeks or even months. After all, this is exactly what Camunda was built to properly deal with.

Having said that, also review the possibilities the workflow engine provides with respect to cutting process definitions (e.g. via message exchange or via call activities) and migrating running process instances. But even though it's possible to migrate running process instances to a new version (see below), it's typically a bit of effort. Therefore, the information presented in the following sections is meant to enable your conscious decision at which points it might make sense for you to avoid the necessity for migration by cutting processes and which aspects of versioning behavior you can control by doing that.

The longer the lifespans of process instances are, the bigger the risks that you might want to exchange important software components like e.g. the workflow engine itself. Typically, very long-running, end-to-end processes (running longer than six months) have periods without activity (e.g. waiting for a certain date in the future). Cut the process into several independent process definitions at these points.

After the mobile phone was shipped, we finish the first process instance and just keep a reminder for the renewal in 24 months.

We periodically check due renewals and start new process instances whenever necessary.

We typically don't model such processes in one diagram it's shown here as a way to show the message flow. Typically, we would rather use a separate diagram per executable process and either leave out the other process completely or show it as a collapsed pool.

Having said this, we want to emphasize that the engine is perfectly fine with handling lots of process instances for a long time. So if you want to have process instances waiting for months or years, you can still do so. Just make sure you think about all resulting implications.

With Camunda Platform 8 you cannot yet influence the version of the started process instance via the call activity. This feature is on the roadmap. At the moment, a new process instance of the latest process definition version is started.

When calling separately modeled sub processes (i.e. Call Activities), the default behavior of the process engine is to call the latest deployed version of that sub process. You can change this default 'binding' behavior to call a specific version or the version which was deployed together with the parent process.

Keeping in mind pros and cons of versioning as discussed above, we can therefore encapsulate parts of a process, for which we want to be able to change the runtime behavior more often into such call activities. This is an especially useful consideration for long-running processes.

We could decide that we always want to follow the latest shipping process changes, even if the rules for shipping changed while we are in the order acceptance phase. We for example reason that this acceptance phase could sometimes take a long time, because the procurement for goods currently not shelved happens within that phase.

Contrary to that, we could decide that the order billing always happens according to the rules valid at the moment we received the order and instantiated the parent process (deployment). We for example reason here that it is critical that the billing follows the rules communicated to the customer together with the offer.