Whenever a process instance arrives at a service task, a new job is created and pushed to an internal persistent queue within Camunda Platform 8. A client application can subscribe to these jobs with the workflow engine by the task type name (which is comparable to a queue name).

If there is no worker subscribed when a job is created, the job is simply put in a queue. If multiple workers are subscribed, they are competing consumers, and jobs are distributed among them.

Whenever the worker has finished whatever it needs to do (like invoking the REST endpoint), it sends another call to the workflow engine, which can be one of these three:

As the glue code in the worker is external to the workflow engine, there is no technical transaction spanning both components. Technical transactions refer to ACID (atomic, consistent, isolated, durable) properties, mostly known from relational databases.

If, for example, your application leverages those capabilities, your business logic is either successfully committed as a whole, or rolled back completely in case of any error. However, those ACID transactions cannot be applied to distributed systems (the talk lost in transaction elaborates on this). In other words, things can get out of sync if either the job handler or the workflow engine fails.

A typical example scenario is the following, where a worker calls a REST endpoint to invoke business logic:

Technical ACID transaction will only be applied in the business application. The job worker mostly needs to handle exceptions on a technical level, e.g. to control retry behavior, or pass it on to the process level, where you might need to implement business transactions.

Handling exceptions on a technical level​

Using the FailJob API is pretty handy to leverage the built-in retry mechanism of Zeebe. The initial number of retries is set in the BPMN process model:

This number is typically decremented with every attempt to execute the service task. Note that you need to do that in your worker code. Example in Java:

Decrement the retries by one.

Provide a meaningful error message, as this will be displayed to a human operator once an incident is created in Operate.

Whenever a job fails with a retry count of 0, an incident is raised. An incident requires human intervention, typically using Operate. See incidents in the Operate docs.

Zeebe uses the at-least-once strategy for job handlers, which is a typical choice in distributed systems. This means that the process instance only advances in the happy case (the job was completed, the workflow engine received the complete job request and committed it). A typical failure case occurs when the worker who polled the job crashes and cannot complete the job anymore. In this case, the workflow engine gives the job to another worker after a configured timeout. This ensures that the job handler is executed at least once.

But this can mean that the handler is executed more than once! You need to consider this in your handler code, as the handler might be called more than one time. The technical term describing this is idempotency.

For example, typical strategies are described in 3 common pitfalls in microservice integration — and how to avoid them. One possibility is to ask the service provider if it has already seen the same request. A more common approach is to implement the service provider in a way that allows for duplicate calls. There are two ways of mastering this:

If these approaches do not work, you will need to add a custom idempotency handling by using unique IDs or hashes. For example, you can generate a unique identifier and add it to the call. This way, a duplicate call can be easily spotted if you store that ID on the service provider side. If you leverage a workflow engine you probably can let it do the heavy lifting. Example: charge(transactionId, amount).

Whatever strategy you use, make sure that you’ve considered idempotency consciously.

Handling errors on the process level​

You often encounter deviations from the "happy path" (the default scenario with a positive outcome) which shall be modeled in the process model.

A common way to resolve these deviations is using a BPMN error event, which allows a process model to react to errors within a task. For example:

We decide that we want to deal with an exception in the process: in case the invoice cannot be sent automatically...

...we assign a task to a human user, who is now in charge of taking care of delivering the invoice.

Learn more about the usage of error events in the user guide.

In BPMN process definitions, we can explicitly model an end event as an error.

In case the item is not available, we finish the process with an error end event.

You can mimic a BPMN error in your glue code by using the ThrowError API. The consequences for the process are the same as if it were an explicit error end event. So, in case your 'purchase' activity is not a sub process, but a service task, it could throw a BPMN Error informing the process that the good is unavailable.

It is crucial to understand that according to the BPMN spec, a BPMN error is either handled via the process or terminates the process instance. It does not lead to an incident being raised. Therefore, you can and normally should always handle the BPMN error. You can, of course, also handle it in a parent process scope like in the example below:

The boundary error event deals with the case that the item is unavailable.

Distinguishing between exceptions and results​

As an alternative to throwing a Java exception, you can also write a problematic result into a process variable and model an XOR-Gateway later in the process flow to take a different path if that problem occurs.

From a business perspective, the underlying problem then looks less like an error and more like a result of an activity, so as a rule of thumb we deal with expected results of activities by means of gateways, but model exceptional errors, which hinder us in reaching the expected result as boundary error events.

The task is to "check the customer's creditworthiness", so we can reason that we expect as a result to know whether the customer is credit-worthy or not.

We can therefore model an exclusive gateway working on that result and decide via the subsequent process flow what to do with a customer who is not credit-worthy. Here, we just consider the order to be declined.

However, it could be that we cannot reach a result, because while we are trying to obtain knowledge about the customer's creditworthiness, we discover that the ID we have is not associated with any known real person. We can't obtain the expected result and therefore model a boundary error event. In the example, the consequence is just the same and we consider the order to be declined.

Note that you have two different ways of dealing with problems at your disposal now:

In this context, we found the terms business error and technical error can be confusing, as they emphasize the source of the error too much. This can lead to long discussions about whether a certain problem is technical or not, and if you are allowed to see technical errors in a business process model.

Or, for example, you could decide to continue a process in the event that a scoring service is not available, and simply give every customer a good rating instead of blocking progress. The error is clearly technical, but the reaction is a business decision.

Applications using databases can often leverage ACID (atomic, consistent, isolated, durable) capabilities of that database. This means that some business logic is either successfully committed as a whole, or rolled back completely in case of any error. It is normally referred to as "transactions".

Those ACID transactions cannot be applied to distributed systems (the talk lost in transaction elaborates on this), so if you call out to multiple services from a process, you end up with separate ACID transactions at play. The following illustrations are taken from the O'Reilly book Practical Process Automation: 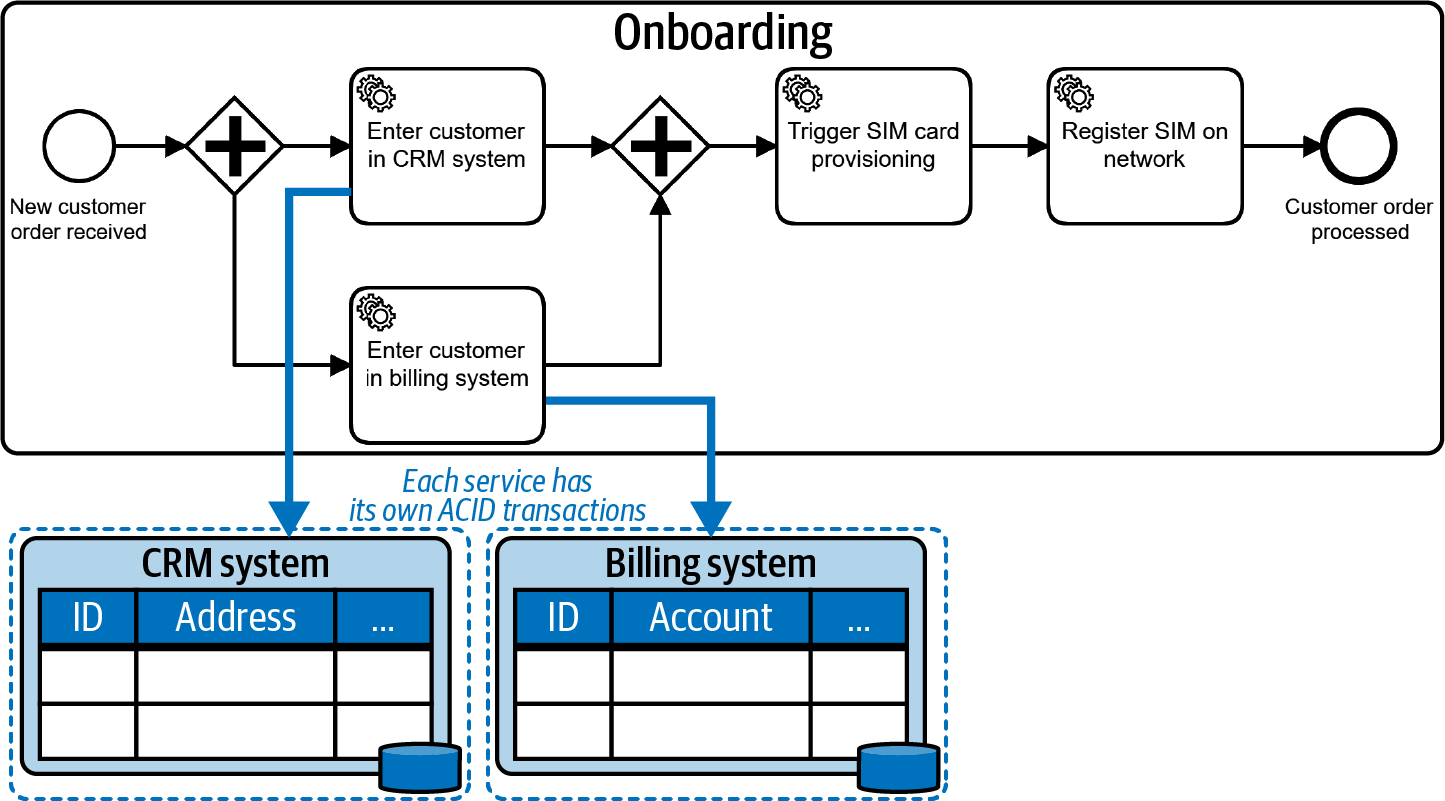 In the above example, the CRM system and the billing system have their local ACID transactions. The workflow engine itself also runs transactional. However, there cannot be a joined technical transaction.This requires a new way of dealing with consistency on the business level, which is referred to as business transaction: 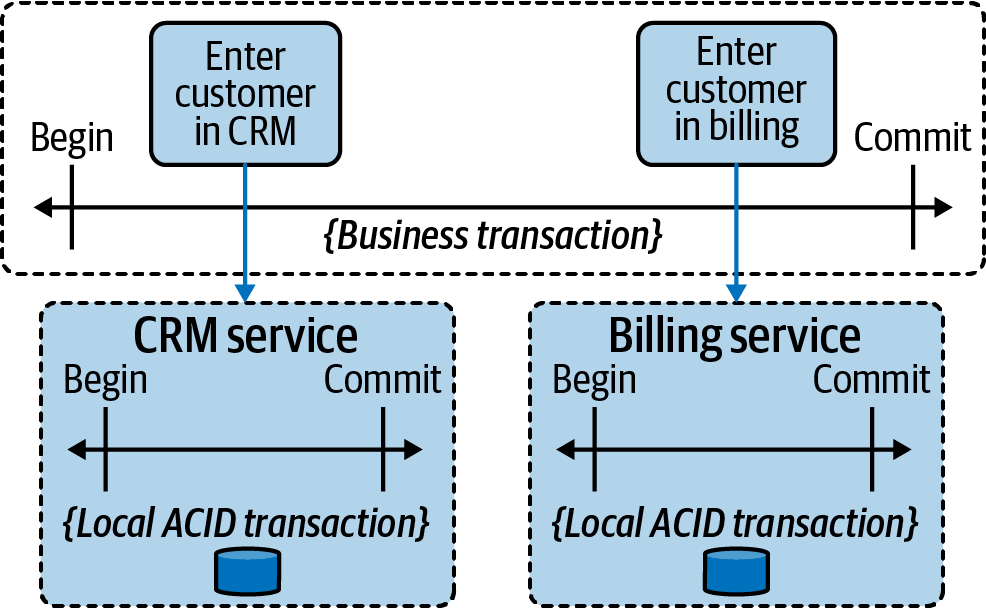 A business transaction marks a section in a process for which 'all or nothing' semantics (similar to a technical transaction) should apply, but from a business perspective. You might encounter inconsistent states in between (for example a new customer being present in the CRM system, but not yet in the billing system).

It is important to be aware that these temporary inconsistencies are possible. You also have to understand the failure scenarios they can cause. In the above example, you could have created a marketing campaign at a moment when a customer was already in the CRM system, but not yet in billing, so they got included in that list. Then, even if their order gets rejected and they never end up as an active customer, they might still receive an upgrade advertisement.

You need to understand the effects of this happening. Furthermore, you have to think about a strategy to resolve inconsistencies. The term eventual consistency suggests that you need to take measures to get back to a consistent state eventually. In the onboarding example, this could mean you need to deactivate the customer in the CRM system if adding them to the billing system fails. This leads to the consistent state that the customer is not visible in any system anymore.

There are three basic strategies if a consistency problem occurs:

Selecting the right strategy is a clear business decision, as none of them are right or wrong, but simply more or less well suited to the situation at hand. You should always think about the cost/value ratio.

The Saga pattern and BPMN compensation​

The Saga pattern describes long-running transactions in distributed systems. The main idea is simple: when you can’t roll back tasks, you undo them. (The name Saga refers back to a paper written in the 1980s about long-lived transactions in databases.)

Camunda supports this through BPMN compensation events, which can link tasks with their undo tasks.

Assume the customer was already added to the CRM system...

...the process triggers the compensation to happen. This will roll back the business transaction.

All compensating activities of successfully completed tasks will be executed, in this case also this one.

As a result, the customer will be deactivated, as the API of the CRM system might not allow to simply delete it.