This best practice targets Camunda Platform 7.x only and is an appendum to understanding human task management.

Do not show the lifecycle of user tasks in the process model, they are generic and common to all processes and so can be controlled by using the Camunda BPM task lifecycle features. 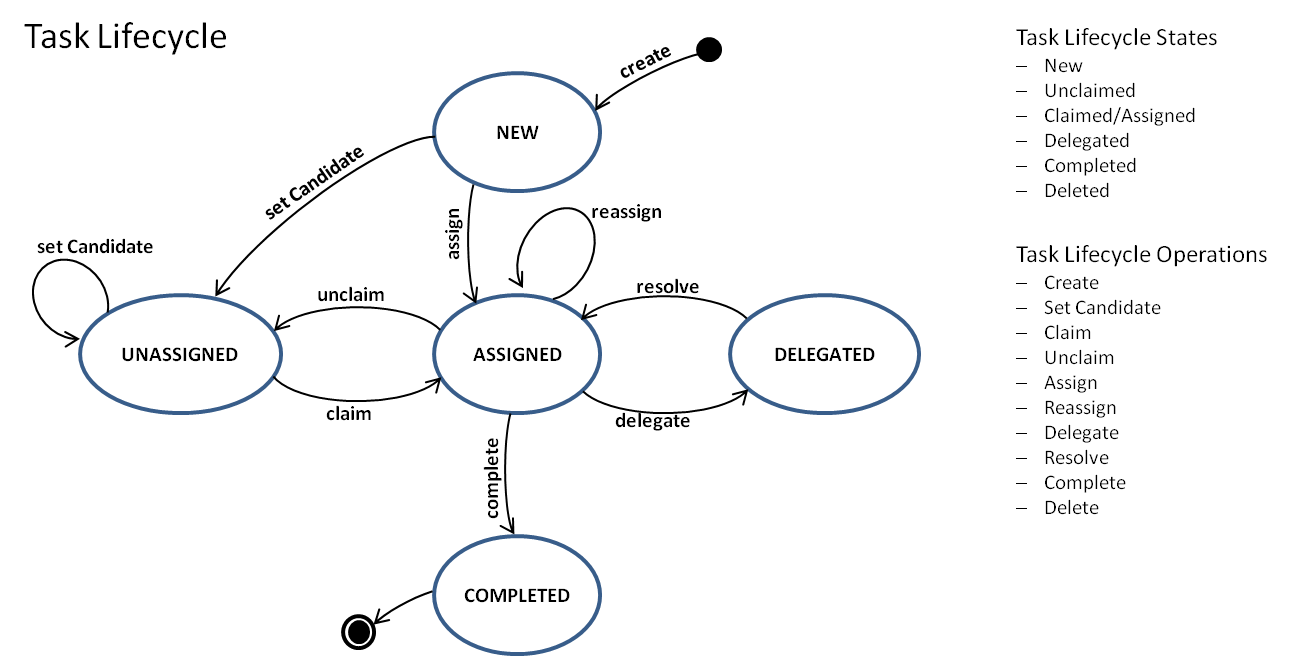 Handing over tasks directly to other people​

You can always hand over a task assigned to you simply by changing the assignee. This means that the new assignee is now responsible and supposed to carry out the task all by themselves.

This can also be achieved via the Camunda tasklist: 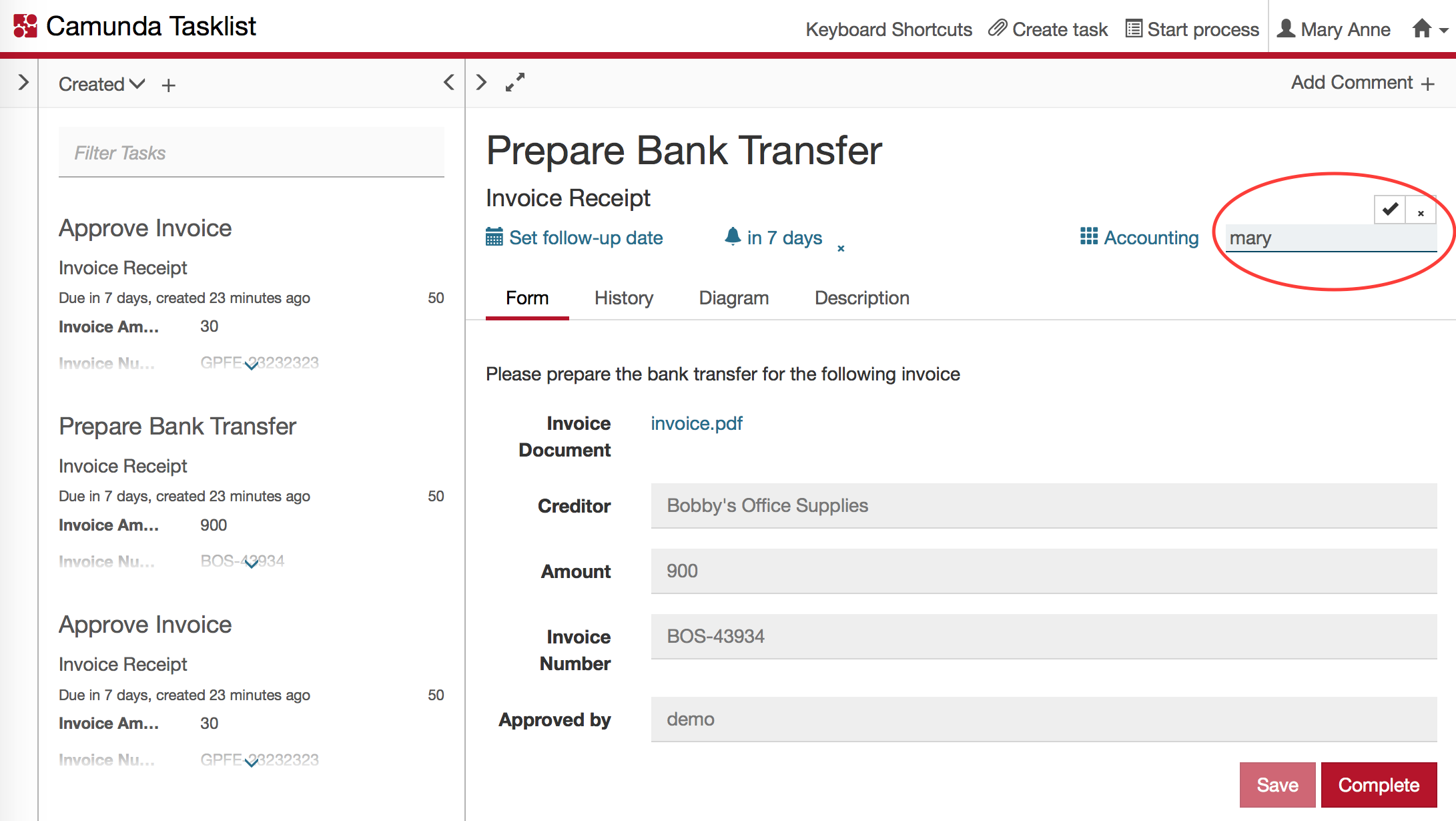 Delegating tasks to other people​

Delegate a task assigned to you by using Camunda "delegateTask". This means that somebody else is supposed to resolve (some of) the work and then pass the task back to you by resolving it. The original assignee is remembered as the "owner" of the task. A typical example is decision support: Some other employees collect information in order to prepare a decision, but the original assignee has to take that decision.

Even if the engine does not enforce that a delegated task can be directly completed, we recommend that you not allow this if you use delegation. The task should always be resolved and then later completed by the owner. That's why there is no transition from "DELEGATED" to "COMPLETED" in the lifecycle shown.

Notifying people about their tasks​

You might want to notify people about new tasks (e.g. via email). Do this by implementing a Camunda TaskListener, like shown in this example.

When you want to have this functionality for every user task you can use a ParseListener which adds it everywhere, so you don't have to adjust the BPMN model. See BPMN Parse Listener to see how this can be done.

Following up on tasks after some time​

Follow up on tasks after some definable time by using Camunda's Follow Up Date field and use it in connection with filtering tasks.

You can set a follow-up date, that may be requested by the user, using the Java API

Now you can use a task filter with criteria checking the follow-up date and if it is due. This can be leveraged via API or in the Camunda Tasklist. 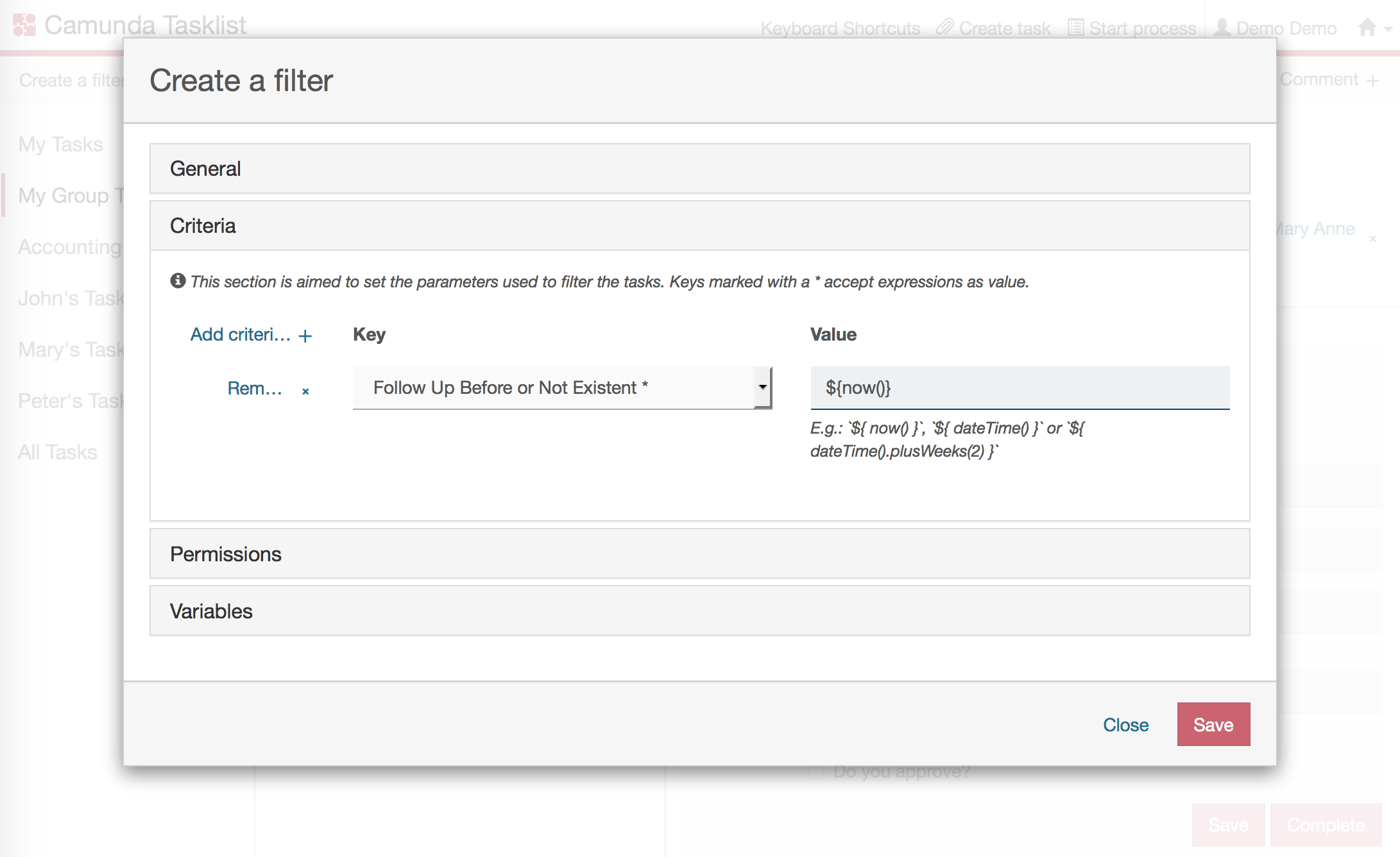 There are different ways of enforcing deadlines for Human Tasks. Typical actions for overdue tasks are:

The following example shows how to explicitly model an escalation:

The model shows an explicit escalation process path: if the tweet does not get reviewed within an hour, the boss needs to be reminded about the laws of the internet age.

Filtering by due date​

This example shows how you can calculate and set the Due Date field:

This example shows how to model a timeout event on a user task:

Every hour, the process engine will invoke the sendEmailReminderListener bean to send out an email. The bean can access all task and process attributes.

Allow users to filter their tasks by relevant business data. Display this data right inside the task list and not just when selecting a task form. To achieve this with acceptable performance, select the implementation approach appropriate for your needs.

To enhance your tasklist with business data, select the implementation approach appropriate for your needs. 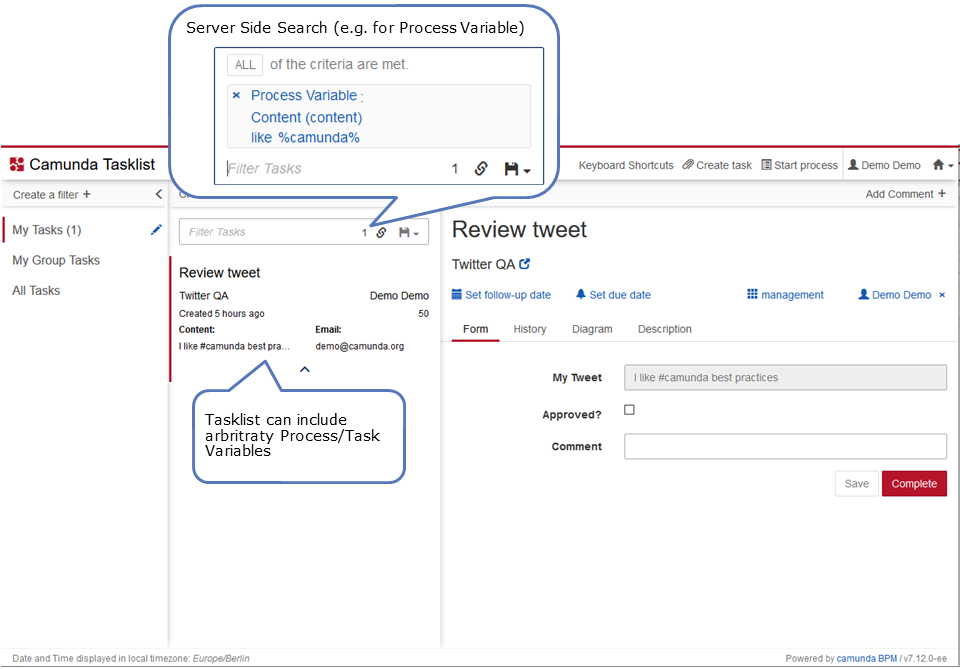 Including derived or calculated values​

In case you need dynamically calculated values or specific fields derived from complex datatypes/objects, you can achieve this by

The total sum of the payment is calculated by calling a method on an invoice object and cached for search and display purposes.

The creditorId is copied into an own variable, so it can be used in filters or shown in the tasklist.

The disadvantage of using process or task variables is that this mechanism does not scale very well, as the process variables are stored in the generic Camunda database schema. This requires one row in the variable table for each variable, and all of them must be joined with the process instance table. The real limit is determined by the amount of data and the database used - but typically you cannot use more than 10 variables.

If you need variables only to search for tasks (but not to display attributes in the tasklist) you can use a simple workaround: Introduce one single process variable optimized for tasklist queries. Extract the attributes you need to filter your tasklist with and combine them to a single search string prepared to work with a SQL 'LIKE' query:

When defining your Camunda tasklist filter, use the searchString variable and search in it by means of a 'LIKE' query.

When you need to filter your tasks by business data stored in your own tables, leverage the possibility to create native queries via the Camunda Java API. Native Queries are

This means you cannot load data from your domain objects by native queries, you simply can express arbitrary WHERE clauses. Example:

Make sure that you do not use hard coded table names to be less dependent on Camunda Internals. However, please note that the example still uses internal details, e.g. by using column names. Your queries or table/column name mappings would need to be adapted in case these internal details change.

In case you want to not just filter tasklists for business data, but also load custom data from domain objects in one query you can implement your own MyBatis mapping and call it via custom code.

Even if this is a very powerful mechanism, we normally do not recommend it, as you need to understand quite a bit about MyBatis. It will be hard to completely avoid dependencies on the Camunda database schema. The database schema is considered internal, hence this also might impose additional maintenance effort in your project for new Camunda versions.

Prefer a ProcessInstanceEntity over a TaskEntity as long as the business data you need is quite similar in between the different user tasks of a process definition. This way you avoid unnecessary database operations. If this is not the case you need to go for the TaskEntity as shown in the following example. 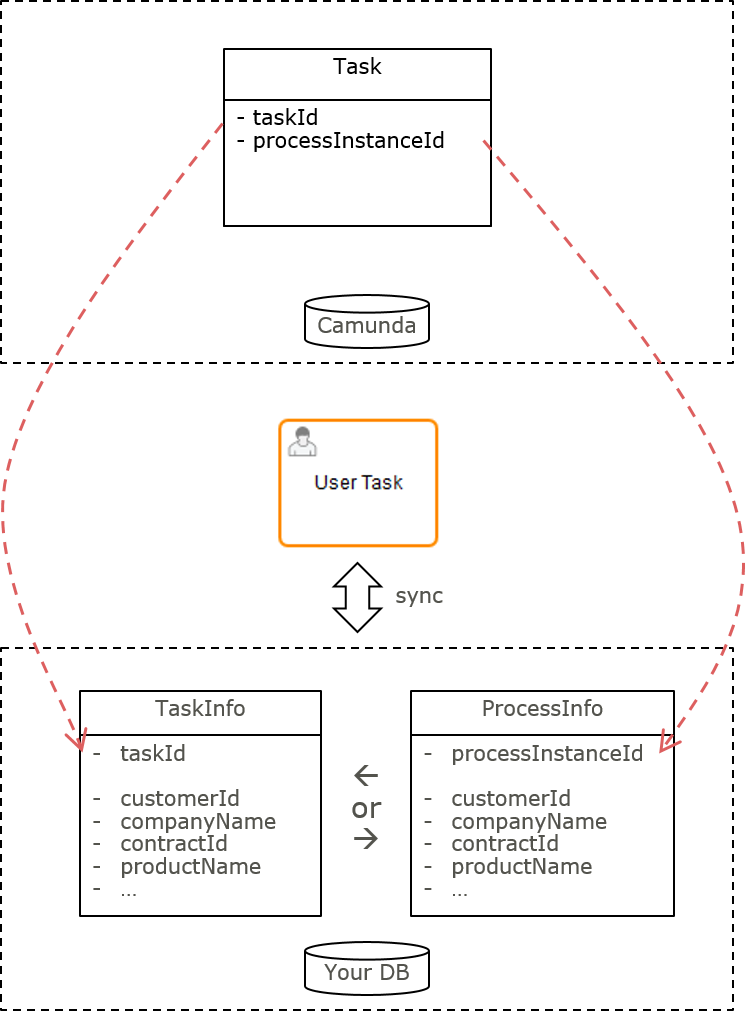 In this entity, combine the Camunda task.id with all your business attributes as separate columns. This allows to query for and display tasks without or with a minimum of SQL JOINs. Consider to use your entity now as a single source for displaying tasklists to your users - hence circumventing the Camunda TaskService Query API for that purpose completely.

Using this approach requires to synchronize your entity with the Camunda state.

If you target a TaskInfoEntity:

If you target a ProcessInstanceInfoEntity: