Variables are part of a process instance and represent the data of the instance. A variable has a name and a JSON value. The visibility of a variable is defined by its variable scope.

The name of a variable can be any alphanumeric string including the _ symbol. For a combination of words, it is recommended to use the camelCase or the snake_case format. The kebab-case format is not allowed because it contains the operator -.

When accessing a variable in an expression, keep in mind that the variable name is case-sensitive.

Restrictions of a variable name:

The value of a variable is stored as a JSON value. It can have one of the following types:

Variable scopes define the visibility of variables. The root scope is the process instance itself. Variables in this scope are visible everywhere in the process.

The scope of a variable is defined when the variable is created. By default, variables are created in the root scope. 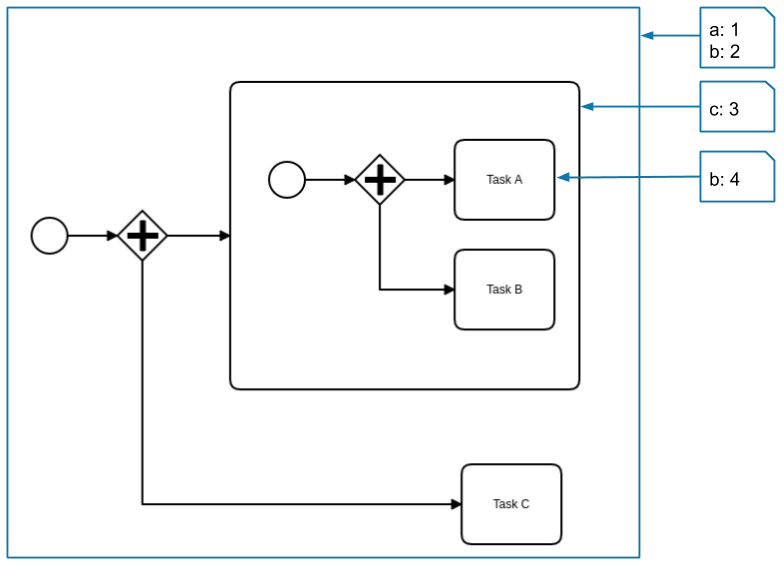 This process instance has the following variables:

When variables are merged into a process instance (e.g. on job completion, on message correlation) then each variable is propagated from the scope of the activity to its higher scopes.

The propagation ends when a scope contains a variable with the same name. In this case, the variable value is updated.

If no scope contains this variable then it is created as a new variable in the root scope. 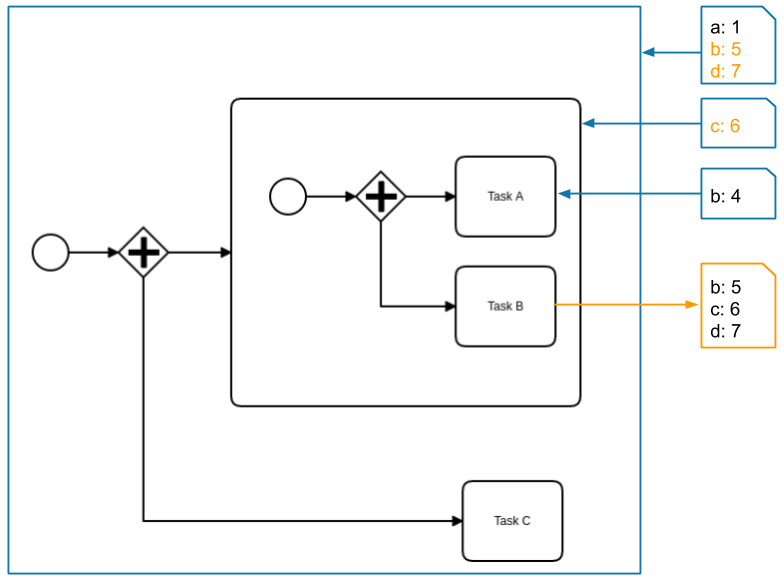 The job of Task B is completed with the variables b, c, and d. The variables b and c are already defined in higher scopes and are updated with the new values. Variable d doesn't exist before and is created in the root scope.

In some cases, variables should be set in a given scope, even if they don't exist in this scope before.

Input/output variable mappings can be used to create new variables or customize how variables are merged into the process instance.

Variable mappings are defined in the process as extension elements under ioMapping. Every variable mapping has a source and a target expression.

The source expression defines the value of the mapping. Usually, it accesses a variable of the process instance that holds the value. If the variable or the nested property doesn't exist then an incident is created.

Variable mappings are evaluated in the defined order. So, a source expression can access the target variable of a previous mapping.

Input mappings can be used to create new variables. They can be defined on service tasks and subprocesses.

When an input mapping is applied then it creates a new local variable in the scope where the mapping is defined.

Output mappings can be used to customize how job/message variables are merged into the process instance. They can be defined on service tasks, receive tasks, message catch events and subprocesses.

If no output mappings are defined then all job/message variables are merged into the process instance.

In case of a subprocess, the behavior is different. There are no job/message variables to be merged. But output mappings can be used to propagate local variables of the subprocess to higher scopes. By default, all local variables are removed when the scope is left.